Whatever Happened to the "Are You Being Served" Cast? 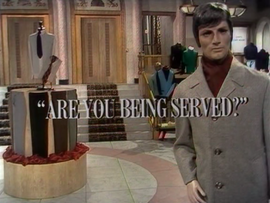 Set in the Ladies and Gentleman’s clothing departments of the fictitious Grace Brothers department store in London, it was predominantly written by Jeremy Lloyd and David Croft, being loosely based on Lloyd’s earlier short-lived career in the 1950’s, working in Simpsons of Piccadilly

Originally designated for the BBC’s Comedy Playhouse series, where the Corporation aired pilot sitcoms to gauge popularity before commissioning a full series, it was vehemently disliked by the powers that be, who suggested it may find a more suitable home (i.e. supposedly more downmarket) with ITV.


However, because of the 1972 Munich Olympic massacre, the BBC found they were left with airtime to fill and against their better judgement, “Are You Being Served” first went out on 8th September of that year.


The pilot show was a success and somewhat reluctantly the BBC commissioned a full series to be produced. Initially broadcast at the same time as the long-running ITV soap “Coronation Street”, it struggled in the ratings, but when it was repeated later in the year, the show began to take off.


The show itself was based around the bringing together of the Grace Brothers Ladies and Gentleman’s outfitting departments onto the same floor and the difficulties created by the so-called merger. 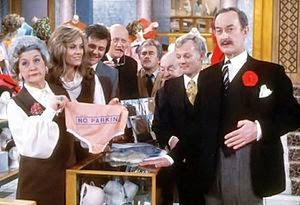 
The Ladies department was made up of the senior salesperson with the ever changing hair colour Mrs Slocombe (played by Mollie Sugden) and her assistant Miss Brahms (Wendy Richard).


Often acting as the referee to all the disagreements between the two departments on the floor, was the very prim and proper floorwalker Captain Peacock (Frank Thornton).


Other regular characters in the initial series included the overall floor manager Mr Rumbold, affectionately known as “Jug-ears” (Nicholas Smith), Warehouseman Mr Mash, who was looked down on by the shop floor staff (played by Larry Martyn), and one of the owners of the store itself “Young” Mr Grace (Harold Bennett).


Over the years there were a few replacements when members of the cast either left the show or sadly passed away. These included Arthur English, James Hayter, Alfie Bass, Mike Berry and Kenneth Waller. 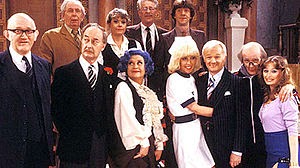 
The main catchphrase used in the show was “I’m Free”, which was used as the answer to a question trying to gain the attention of a colleague (e.g. Mr Humphries, are you free?)


Mrs Slocombe used to wax lyrical about the problems caused by (and to) “her pussy” (her pussy being her pet cat that lived at home).


Whenever Young Mr Grace left the floor, he generally ended by saying “you’re all doing very well”, whilst waving his walking stick in the air and almost falling over.


An “Are You Being Served” film was released in 1977, using the original cast members as was the custom with UK sitcoms of that era. Based around a successful stage version of the show that ran in Blackpool in the summer of 1976, the film was a big box office hit and still is shown on satellite and cable channels from time to time.


Even an Australian version of the show ran in 1980-81 with a whole new cast, except for John Inman who reprised his role of Mr Humphries. A US version was made into a pilot, but was never commissioned as a series (the original show had a large cult following in the US).


In 1992, many of the original cast returned for a spin-off show entitled “Grace and Favour” where they all lived in a country manor house (in the USA and Canada it was called “Are You Being Served – Again?”.


So Whatever Happened to the Cast Members?


Sadly the majority of the cast have now passed on, leaving only Mike Berry remaining.

Mollie Sugden (Mrs Slocombe) – Isabel Mary “Mollie” Sugden was born in Keighley, Yorkshire in 1922. In a long standing TV career, she appeared in many UK favourites such as The Liver Birds, Coronation Street, Z Cars and Steptoe and Son.


She died in July 2009 of heart failure in Guildford, Surrey, with her last public appearance being at the funeral of Wendy Richard (who died 4 months earlier)

Wendy Richard (Miss Brahms) – Born Wendy Emerton in July 1943, she appeared in many UK sitcoms prior to Are You Being Served and went on to star in the BBC flagship soap opera EastEnders for a period of almost 22 years.


She passed away in February 2009, battling her 3rd bout of breast cancer.

Frank Thornton (Captain Peacock) – Born Frank Thornton Ball in January 1921, he had appeared on screen as early as 1954. A familiar face on British TV, he appeared alongside such legendary comedic actors as Tony Hancock, Benny Hill, Harry H Corbett and Eric Sykes. In later years he appeared as “Truly” in the long running, greatly loved BBC sitcom “Last of the Summer Wine”.


He died (fairly recently) of natural causes in March of this year, aged 92.


Arthur Brough (Mr Grainger) – Born Frederick Arthur Baker in February 1905, the diminutive actor (only 5ft 2in tall) ran his own theatrical company between the wars (the Arthur Brough Players), establishing repertory companies in many different areas of the country.


After the 5th series of “Are You Being Served” Arthur’s wife of 50 years died and the emotionally distraught actor passed away himself just 2 months later in May 1978. He was subsequently replaced by James Hayter who played Mr Tebbs.


John Inman (Mr Humphries) – Frederick John Inman was born in June 1935 and actually worked in a Gentleman’s outfitters in Blackpool as a young adult. He went on to make his West End debut in the 1960’s playing numerous roles in different theatres. He established himself as a pantomime dame, often playing one of the Ugly Sisters alongside comedian Barry Howard.


In 2004 he contracted hepatitis A from contaminated food and passed away aged 71 in March 2007 from the infection.

Trevor Bannister (Mr Lucas) – Trevor Gordon Bannister, born August 1934 was probably the best known of the actors when the programme started from his role on the ITV sitcom “The Dustbinmen” in the late 1960’s. Also remembered from his roles in “Steptoe and Son”,” Keeping Up Appearances” and later from “Last of the Summer Wine”


Nicholas Smith (Mr Rumbold) – Born in March 1934, he was a gifted singer and musician, training as an actor at RADA. He continues to write music and poetry.
After suffering a fall at home and spending 7 weeks in hospital, sadly Nicholas passed away on 6th December 2015


Larry Martyn (Mr Mash) – Born in March 1934, was a regular on many sitcoms airing in the 60’s and 70’s. He had to leave after the 3rd series, being committed to working alongside Jimmy Jewel in “Spring and Autumn” His role was replaced by Arthur English as Mr Harman.

Harold Bennett (Young Mr Grace) – Also fondly remembered as Mr Blewett in “Dad’s Army”, he was born in September 1899 and in his early days he actually toured America performing as a circus clown.


His last performance in the show was in the Christmas special in 1981, which was broadcast 3 months after his death in September of that year.


He died of a heart attack, 2 days before what would have been his 82nd birthday.


Arthur English (Mr Harman) – Born in Aldershot, Hants in May 1919, he replaced Larry Martyn as the warehouseman Mr Harman. Being instrumental in the resurgence of his home town Aldershot Football Club, he died in April 1995 after complications from emphysema.


James Hayter (Mr Tebbs) – Born in April 1907, he replaced Arthur Brough after his death in 1978. He left the series after being paid a significant amount by Mr Kipling cakes for which he narrated their TV adverts.


Alfie Bass – (Mr Goldberg) – Born Abraham Basalinski in April 1916, he replaced James Hayter for series 7. He passed away in July 1987 after a heart attack.


Mike Berry (Mr Spooner) – Actor and singer, he was born Michael Hubert Bourne in September 1942 and had 3 hits in the UK singles chart during the 60’s. He replaced Trevor Bannister as the junior member of the Gentleman’s department.


Now aged 70, he is the 2nd surviving member of the regular cast.


Kenneth Waller (Old Mr Grace) – Also remembered as Grandad in Carla Lane’s comedy “Bread”, he took over the role as the Grace Brothers’ store owner, becoming Old Mr Grace in series 8 after Young Mr Grace supposedly died from a scuba-diving accident in the Caribbean. The fact that he was 28 years younger than his so called “younger” brother was never lost on the audience.

“Are You Being Served” came from an era of British comedy which could be called harmless, suggestive fun. Based on sexual innuendo, mistaken identity and a certain amount of slapstick, it was famed for its use of double entendres and went out of its way to poke fun at the British class system.

Other Similar Articles  – (click on the titles to view).
Whatever Happened to Richard O’Sullivan?


Whatever Happened to the “On The Buses” Cast?


Whatever Happened to the “All Creatures Great and Small” Cast?


Whatever Happened to “Doctor in the House” star Barry Evans?


If you have enjoyed this posting, may I request that you click on one of the adverts featured on the page (they earn me the odd penny or two allegedly!).
Posted by Uncle Tatty at 14:02