The Stockport Air Disaster – 50 Years On.

50 years ago today a plane returning from Majorca suddenly lost power and hurtled to the ground killing 72.

It remains to this day one of Britain’s worst, if not lesser remembered air disasters. 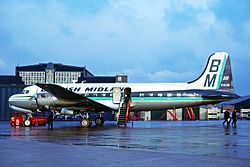 Filled with holidaymakers returning home to Manchester airport, the British Midland Canadair Argonaut C-4 aircraft hurtled across rooftops and crashed onto a patch of land just outside of Stockport, Greater Manchester, bursting into a ball of fire.

There were 72 fatalities with the remaining 12, including the captain and a stewardess, seriously injured.

Many locals arrived at the scene to help in any way possible but were held back due to the thick black smoke that engulfed the area. 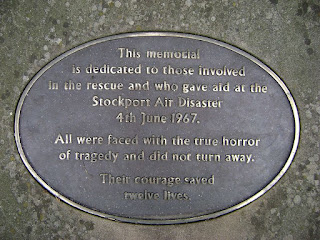 A subsequent air investigation revealed the cause to be “fuel starvation” due to a fault in the fuel lines.

Still considered to be one of the worst air disasters in UK aviation history, the number of deaths were only surpassed by the Lockerbie bombing in 1988 (killing 270 including 12 on the ground) and the Staines air crash in 1972 (118 fatalities).
Posted by Uncle Tatty at 18:54 No comments: Links to this post